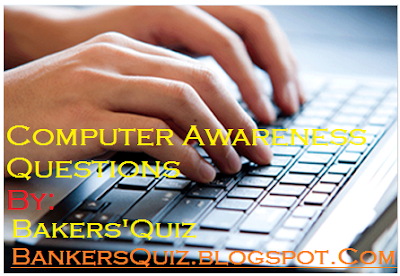 1. The earliest calculating device is

a) abacus
b) difference engine
c) clock
d) none of the above
2. Assembly language
a) is the easiest language to write programs
b) need not be translated into machine language
c) uses alphabetic codes in place of binary numbers used in machine language
d) none of the above
3. A source program is
a) a program written in a machine Language
b) a program to be translated into machine language
c) a machine language translation of a program written in a high-level language
d) none of the above
4. Stand-alone programs refer to
a) object programs
b) source program
c) executable programs
d) none of the above
5. Algorithm and flowchart help us to
a) direct the output to a printer
b) know the memory capacity
c) identify the base of a number system
d) specify the problem completely and clearly
6. The steps in an algorithm
a) must follow a prescribed order
b) will follow a prescribed order sometimes
c) need not follow any order
d) will follow a random order
7. Input/Output serves as
a) an interface between input and memory
b) an interface between user and machine
c) an interface between input and CPU
d) an interface between data and program
8. The major advantage of the flowchart is
a) Reduce error and omissions in the program
b) Reduce logic
c) Reduce programming steps
d) Reduce the error
9. An algorithm is said to be deterministic. Since algorithm has
a) One alternative
b) Two alternatives
c) Three alternatives
d) More than three alternatives
10. Find the product of 1001 and 1101
a) 1110111
b) 1110100
c) 1110101
d) 1001010
11. Evaluate 10l 11/10
a) 1010, with remainder 1
b) 1110, with remainder 1
c) 1100, with remainder 1
d) 1011, with remainder 1
12. The number of bits in single word is known as
a) Word length
b) Bytes
c) Buffer
d) Word count
13. A floppy disk has. 80 tracks; each track is subdivided into 9 sectors. Each sector can store 512
bytes. What is the capacity of the disk in K bytes?
a) 512K bytes
b) 1024Kbytes
c) 364K bytes
d) none of the above
14. Which is the single user Operating System
a) NOVELL NETWARE
b) DOS
c) UNIX
d) none of the above
15. Which is the correct multi-user system
a) UNIX
b) NOVELL NETWARE
c)WINDOWS NT
d) An the above
16. Which the correct single user operating system
a) MS-DOS
b) CP/M
c) WINDOWS 95
d) All the above
17. State which is not an exactly an operating system
a) MS-DOS
b) Widows 3.1
c) Windows 95
d) None of the above
18. The External commands generally come with the extension
a) .COM
b) .BAT
c) .EXE
d) All the above
19. State the valid resident commands
a) REN
b) DIR
c) VER
d) All the above
20. State the valid DOS command types
a) Internal or Resident commands
b) External or Transient commands
c) Both (a) and (b)
d) None of the above
21. MS-DOS operating system consists of
a) MSDOS.SYS
b) IO.SYS
c) COMMAND.COM & set of utilities
d) All the above
22. State the correct External command
a) ATTRIB.EXE
b) BACKUP.EXE
c) RESTORE.EXE
d) CHKDSK.EXE
e) all the above
23. In formatting, floppy is divided into
a) sectors
b) both (a) and (b)
c) tracks
d) none of the above
24. The DIR command is generally used to display
a) File name
b) Size of the files
c) date and time
d) File name extension
e) All the above
25. Nearly all the Windows applications share a common set of commands
a) New
b) Open
c) Save
d) Print
e) all the above