1. In India, planned economy is based on ?
ANS : Socialist System

2. In India, agriculture income is calculated by ?
ANS : Output method

4. The Mid-Day Meal Scheme has been launched by the Union Minister of ?
ANS : Human Resource Development 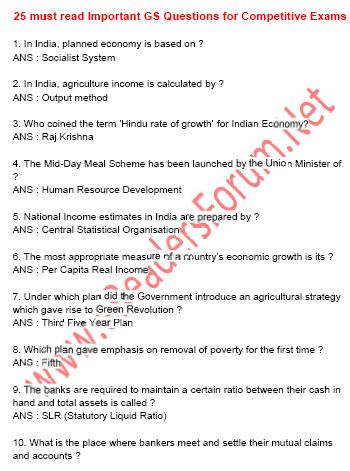 6. The most appropriate measure of a country’s economic growth is its ?
ANS : Per Capita Real Income

7. Under which plan did the Government introduce an agricultural strategy which gave rise to Green Revolution ?
ANS : Third Five Year Plan

8. Which plan gave emphasis on removal of poverty for the first time ?
ANS : Fifth

9. The banks are required to maintain a certain ratio between their cash in hand and total assets is called ?
ANS : SLR (Statutory Liquid Ratio)

10. What is the place where bankers meet and settle their mutual claims and accounts ?
ANS : Clearing House

12. Who wrote the book “planned Economy for India”?
ANS : M.Visvesvaraya

14. Which institution is known as Soft loan window of World Bank ?
ANS : IDA

15. Per Capita Income is obtained by dividing National Income by ?
ANS : Total population of the country

16. STEP is the abbreviated name of the welfare programme to help ?
ANS : Woman

17. In India disguised unemployment is found in ?
ANS : Agriculture sector

19. What is the purpose of the India Brand Equity Fund ?
ANS : To make ‘Made in India’ a label of quality
20. Reserve Bank of India gives licence for credit creation to which banks ?
ANS : Scheduled banks

21. Many times we read in financial newspaper FII. What is the full form of FII ?
ANS : Foreign Institutional Investment

23. ‘Gresham’s law’ in economics relates to ?
ANS : Circulation of currency

24. Fiscal policy in India is formulated by whom ?
ANS : The Finance Ministry