In this post, we are sharing memory based questions of non-tech section asked in Assistant Loco pilot written exam of 2014. Since after 2014 no exam of ALP till date, so this is the most recent exam of ALP. The upcoming exam question pattern of ALP is very much similar to this one. 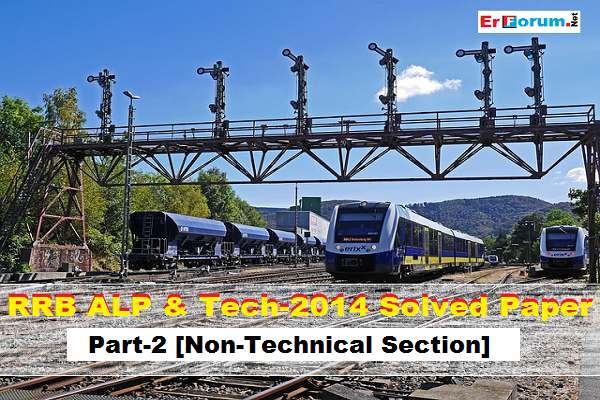 Notification No: CEN-01/2014
Date of Publication: 18-01-2014
Date of Closing: 17-02-2014
Exam Date: 15-06-2014, 29-06-2014, 13-07-2014 and 20-07-2014
This Memory based previous Papers of ALP-2014 will contains questions collected from different RRBs. The Exam was conducted on different dates with Pen-Paper mode. In this post, we are sharing only “non-tech” section here. For Technical Questions of ALP 2014 please Click here
Memory based Non-Tech Solved Questions:
1. Who is present CAG of India?
Ans: Shashikant Sharma (As in 2014)
2. Which Indian state has the largest coastline?
a. Andhra Pradesh
b. Gujrat
c. Maharashtra
d. Tamilnadu
Ans: b
3. The chief minister of Himachal Pradesh?
Ans:
[Note: These type of question doesn’t mean that you have to memorize all state CM and Governor. These type of question are asked only when they are in news due to any issue or recent Changes on several posts of CM and Governor]
4. Who got Padam Vibhushan in Yoga?
Ans: B K S Iyenger
[Note: This question is also asked due to death of The Yoga Guru. Who got the Prestigious 2nd highest Civilian honor of India, Padam Vibhushan.]
5. Which actress recently rejected Dada Saheb Falke award?
Ans- Mala Sinha

10. Reproductive part of a flower?
(a) Calyx and Corolla
(b) Calyx and androecium
(c) Androecium and Gynecium
(d) Corolla and Gynaecium
Ans: C

11. Ranthambhore is located in?

12. One question related to tiger reserve

13. One question related with Suchitra sen.

Check it: ALP/Tech Previous Solved Papers.
Conclusion: To score well in Current Affair/ GS section of ALP Exam, Only last six month CA is sufficient. Most of the CA section question will be easily solved with the study of that part.
Note: These questions are memory based. So, some questions may be wrongly framed. We will try to share more questions of 2014 ALP/Tech Exam as soon as we get.