1. First Bank which is established in Bihar was?
Ans- Union Bank of India

3. Canal irrigation in Bihar is prominent in the?
Ans- Northern Plane of Ganga 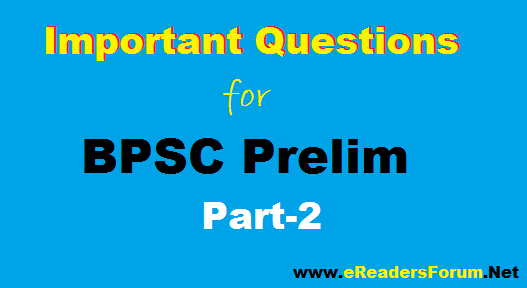 6. Which language of Bihar is added in the 8th schedule of the constitution in 2003?
Ans- Maithili

8. First Doordarshan center was established in which place of Bihar?
Ans- Muzaffarpur

10. Which district of Bihar has lowest literacy rate?
Ans- Kishanganj

12. What percentage of agricultural land is used in Bihar?
Ans- 39%

18. During the period of Aurangzeb Patna was known as?
Ans- Azimabad

20. When did Bihar faced large earthquake which destroyed a large number of Man and Material?
Ans- 15 June 1934

21. Which district of Bihar is declared as Crime District during 1942 quit India movement?
Ans- Saran

22. The Capital of Jarasandh
Ans- Rajgir